Lilly Library can stream those complete films for which we have acquired permission or license. This process requires the library to look for the rights holder for each individual film and determine if permission for streaming can be granted or if a license is available for purchase. Please note that finding the rights holders for foreign films can be particularly difficult and time-consuming, and the cost for streaming rights in general may be prohibitive. We limit requests to films that are required viewing for a course.

Currently, Wabash has access to a hand-picked collection of approximately 50 streamed feature films through Swank Digital Campus. The content of this collection changes annually and is selected each August/September based upon faculty need and historical usage. If there are films which you would like to recommend for this collection, contact Susan Albrecht at albrechs@wabash.edu or x6216.

If streaming of a film cannot be arranged, an excellent alternative option is for instructors to place physical copies of video material on reserve at the Lilly Library Circulation Desk.  There are a variety of checkout period options available. The library has several viewing stations or instructors may opt to allow students to take materials out of the library. Please contact Susan Albrecht to make reserve requests at albrechs@wabash.edu or x6216.

Also, streaming a clip or clips from a film may be a viable option for instructors. There are copyright laws that discuss the technical means for making copies of film and others that describe the rules governing the use of media for educational purposes. Section 1201 (a) (1) of the copyright law allows the decryption of copy protection of motion picture media (such as DVD, VHS, Blu-ray) that are lawfully made and acquired, for the purposes of creating short clips for criticism and study purposes for professors and media studies students. Talk to us about your interests and needs; we will work to help you accomplish your educational objective within fair use guidelines. Contact Susan Albrecht, albrechs@wabash.edu or x6216, or the Educational Technology Center, media@wabash.edu or x6174.

WHAT HAPPENED TO THE OLD KANOPY?

In January 2019, Wabash moved to a mediated model with Kanopy, whereby all requests for a Kanopy film are made through an online form. This step was taken in response to dramatically escalating costs which were rising at an unsustainable rate. The mediated model allows for more careful stewardship of library funds.  In our first years with Kanopy, the Wabash community had open access to the entire collection. After the fourth viewing (defined as 30 seconds of screening), a license was triggered with an accompanying $120 charge. This mechanism allowed for no controls of who was using Kanopy films or for what purpose. In the old model, patrons often accessed films purely for recreational screenings or triggered licenses when the library already owned the DVD. The new request form allows for conversation about a film’s planned use and the specific need for streaming format.

For personal use, anyone with a Crawfordsville District Public Library borrower’s card may access Kanopy through the CDPL’s EContent page.  Patrons may borrow up to 10 titles per month.  NB: Films accessed through CDPL are not eligible for classroom screenings!

HOW DOES KANOPY LICENSING WORK?

When Wabash College licenses a film from Kanopy, we do not own the film; rather, we gain access to the film for one year (currently $120 per film). This license grants access to the entire Wabash community and also provides rights for public screenings. At the end of the year, the film is deleted from Wabash’s collection unless a new license is purchased.

HOW DO I KNOW WHICH KANOPY FILMS ARE CURRENTLY IN OUR COLLECTION?

There are two ways to determine this. The best option is to visit the Wabash Kanopy Streaming site, where all films we currently license will display.  Alternatively, when searching or browsing titles at the generic Kanopy site, you may select “Watch now” and click through the links.  If a film has been licensed, then the film landing page will have a PLAY button. If it is not licensed, you will see a request form.

WHAT MAY I REQUEST FROM KANOPY?

The primary use of Kanopy Films should be for a course, not for recreational viewing. There should also be a strong rationale for the use of the film in streaming format. Given the cost of the license ($120) and its limited length (1 year), ownership is preferred to short-term access. Therefore, unless there is a need for the streaming version, DVDs are preferred. Examples when streaming format may be appropriate include:

HOW DO I REQUEST A KANOPY FILM?

If you select a film title in Kanopy and we do not already have it licensed, the following form will appear. 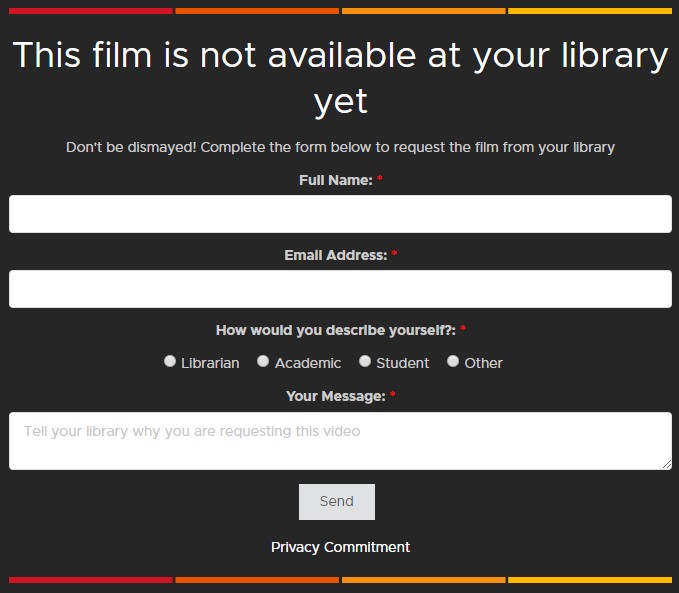 Please use the “Your Message” area to describe the course in which you would use the film or other rationale for licensing it, as well as your reason for seeking streaming format.

You may also consult our library catalog to determine whether the title is already in the collection in physical format:

WHAT HAPPENS AFTER I MAKE THE REQUEST?  HOW LONG WILL IT TAKE TO GET THE FILM?

Completed request forms will be sent to Susan Albrecht. You can expect a quick response from Susan with any follow-up questions and a licensing decision. The Kanopy team is responsive and films will typically be made available within 1-2 working days of an approved request.

HOW WILL I KNOW THE EXPIRATION DATE FOR A FILM?

You may always check with Susan Albrecht (albrechs@wabash.edu / 361-6216) to determine a license’s expiration date. If that falls before the date you need it, a license renewal can be arranged in advance.

Lilly Library is a founding member of PALNI, ALI, and The Oberlin Group